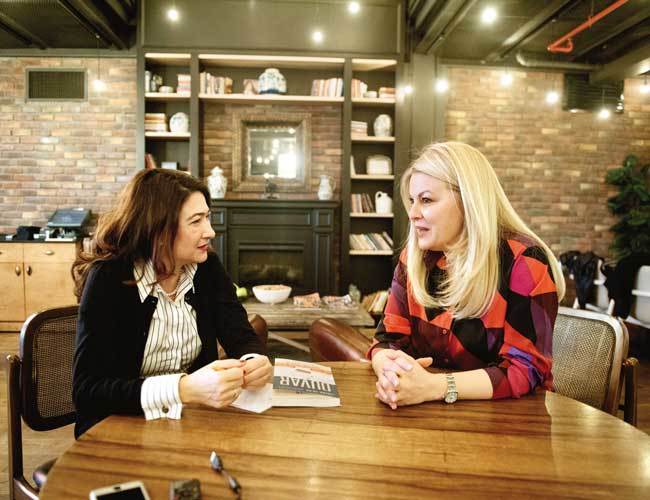 By building walls on its eastern borders, Turkey has implicated it is turning its face to the West. These walls are also NATO walls, according to prominent academic Deniz Ülke Arıboğan, who analyzes the meaning of more than 60 walls between states in the post-Cold War era in her new book ‘Wall’

When you build a wall you consider the other side of the wall as the ‘other,’ and the ‘other’ does not have a positive connotation, Arıboğan says, adding that a wall also creates a sense of belonging.

Turkey is turning its face toward the West similar to what it did in the past, and the country considers itself belonging to the West by building walls against the East, leading academic Arıboğan has said.

“These walls are also NATO walls and European walls,” she noted, underlining a shift from a neo-Ottoman foreign policy to a defensive one.

Why did you name your book “Wall?”

When I use the concept of wall I try to reflect the new world spirit. When the Berlin Wall collapsed, it opened a new era. We thought there would be a world without borders, symbolizing liberalization, democratization and globalization.

The day the Berlin Wall collapsed there were only a dozen of walls in the world, but at this moment there are at least 65 countries building very thick walls on their borders. The wall has lots of meanings. When you build a wall you consider the other side of the wall as the “other.” And the “other” does not have a positive connotation.

When you build a wall it also creates a sense of belonging; you are declaring your territory. This is ownership. If there is a threat to your territorial integrity, you create a wall and say: “This territory is mine.”

Why do you have separate chapters on China and Russia?

Russia is in the midst of a military expansion, trying to reach the warm waters of the world. Russia is expanding militarily and China economically. The walls are against the expansionists.

In the Western world, some create walls against refugees, some against terrorists, some against globalization and some against Russia. But the main thing we are creating is a world with walls leading to an interstate system.

Let’s talk about the walls of Turkey

There is an important shift. Turkey was aspiring to play a leadership role in the former Ottoman territories. There was talk about neo-ottoman ideology and zero problems with our neighbors. We were clearing land mines along the Syrian border, opening the borders and lifting travel visas. We believed that all people living in the former Ottoman lands would be united under one Turkish leadership. But now we are building walls. We have completely cut the Turkish and Syrian territories from each other. A few years ago, our president said the Syrian issue was our domestic problem.

Now we are saying these are external issues. With walls against Syria, Iraq, Iran and Armenia, Turkey is closing its borders to the East and the Southeast.

Is the government aware of the consequence the way you define it?

They have to be. It is not a reactional policy. After former Prime Minister Ahmet Davutoğlu’s resignation, there was a shift in foreign policy. Although public opinion is on the other direction, I think Turkey is making a U-turn toward the West, turning its face to the West similar to the republican foreign policy. Turkey says: “These are the others, and I belong to Europe.” These walls are also NATO walls and European walls.

Why do we build walls on the borders with Armenia and Iran, with which we have good relations? Turkey is declaring its location.

It also symbolizes its territorial integrity; it hardens its borders by saying: “You cannot divide my country.” It draws a line between its own Kurdish issue and the other. The border also symbolizes the belonging. At some point we were so close with northern Iraq, but now there is a wall. Why? Because it has reached a point that it can no longer control. It [the government] says: “At least let me have consolidation within.”

Drawing a line could consolidate the will of the Kurds on the other side to have their own state, whereas there were those like former President Turgut Özal who favored an intense interdependence to fend off the Kurds’ ambition for statehood.

But let’s not forget that expansionist states are against walls. They have strong self-confidence. But once you become defensive, you start building walls. In a world based on geopolitics of fear, Turkey is taking up an introvert policy to protect its inside, and in the meantime it wants the centers in Iraq and Syria to get stronger.

That’s the new mentality in the relations we are reestablishing. We were the first ones to show reaction to the independence referendum in northern Iraq. The whole world gave a similar reaction, which would not have been the same five years ago. Those who applauded the Arab Spring now do not want anyone to take to the streets.

Don’t you think such policy will fasten the establishment of Kurdish states outside Turkey’s borders?

Not really. Building a wall not only makes those the “other,” but also means it [Turkey] will intervene. There will be relations from state to state. In globalization, state establishments were pushed aside, there were communications between communities. Now states are gaining prominence. In fact we are not talking about strong countries, but strong leaders, like Russian President Vladimir Putin and German Chancellor Angela Merkel. Ethnic groups, sects and interest groups no longer have their former influence.

In this case, how do you think Turkey’s Kurdish issue will evolve?

These kinds of movements weaken when they do not get strong international support. We have seen that during the war in Syria, the Kurdish issue was supported. But Kurds were strengthened as long as it was fighting against a strong Islamic State of Iraq and the Levant (ISIL). If you think they will get stronger as ISIL loses power, you are wrong. The weaker ISIL gets, the less need there is for the Kurds; and then the melting will start. The crisis in Syria goes beyond the Kurdish issue; it has become a U.S.-Russia matter.

Domestically, I do not think the process will be done like those in the past, i.e. in the form of democratization or a peace process. Turkey is governed by a nationalist front and it is impossible to build a peace process that the public as a whole will approach positively.

Globalization has brought sub-identities to the surface, the new order tells us to forget our sub-identities and stick to our upper-identities as citizens. I do not believe the Kurdish movement will be nourished into a strong momentum as it has in the past. They will find their places among major political parties.

You claim Turkey is building a wall against Russia, signaling that it belongs to the West. Looking at Turkish-Russian relations, however, that might not appear as such to the Western world.

Relations with Russia are there to balance relations with the West. I think Turkey has been humiliated by the West and that current populist policies will create serious problems for Turks and Muslims living there. If Turkey fails to strike the balance with Russia, it cannot protect it citizens there either. This is a silent scream from Turkey, which is saying: “Look I am drawing my lines, don’t exclude me.” The day Turkey will enter an alliance with Russia, the loss of the West will not be limited to Turkey, but it will encapsulate the whole Middle East. Americans will become unable to fly a single plane. Turkey is the holder of the balance; it will have relations with both Russia and Iran while remaining a part of the West.

But the West says: “We don’t have a place in our club for a Turkey that will slide into authoritarianism.”

Look at the state in which their club is. How is it in Hungary or Poland? How is the rise of the far-right in Germany or Holland? I think Europe is under the threat of fascism and totalitarianism. The rise of populism is killing the very ideal of the European identity based on democracy and freedom.

WHO IS DENİZ ÜLKE ARIBOĞAN?

Born in 1965, Professor Deniz Ülke Arıboğan received her undergraduate degree in international relations from the Faculty of Political Sciences at Ankara University.

She studied international security and terrorism at the University of St. Andrews in Scotland. Arıboğan is the author of eight books, including “Map of the Future” and “From the End of History to the End of Peace.”

She then became a member of the Board of Trustees at Istanbul Bilgi University.

A member of the World Academy of Arts and Sciences, she is currently a senior fellow at the University of Oxford CRIC (Centre for the Resolution of Intractable Conflict).

She is also a member of the International Dialogue Initiative (IDI), which aims to facilitate dialogue between various large groups, states and cultures for the purpose of learning about differences in perspective.